Disclaimer; this article reflects Matt’s personal opinions and experience. He has not received any kind of sponsorship, support, or benefit, from any source, for writing this review.

In October 2017 I upgraded the family tree software on my computer. I had been using “Family Tree Maker” (2005 version) for 10+ years, but this was showing its age and no longer working properly in certain respects; specifically, failing to save reports to PDF. Also modern software can now do so much more than FTM-2005 could!

I spent months during 2017 looking into what new program I should upgrade to. I browsed reviews and downloaded free trial versions of several different software programs to try them out. Then I came to Family Historian 6 (FH6), and my first impressions of it were much better than for any other program that I had tried. I liked its interface and layout on my computer screen, and was drawn into using it in a way which I hadn’t been by the other programs that I’d looked at. So after a free 30 day trial period, I bought a £35.99 licence key to continue using it. See; http://www.family-historian.co.uk/

Although I was able to transfer my main family tree database (containing nearly 4,500 individuals, and 1300+ families) over from ‘Family Tree Maker 2005’, into ‘Family Historian 6’ (via GEDCOM), its sources/citations were in a muddle (partly due to the way in which FTM-2005 handled them!). So I began a fresh family tree ‘project’, entering the details that I know from scratch! This would help me to learn the new program better, and to better cite the evidence that I have. But as I’ve done this, I’ve learnt how complex a subject source citations are themselves, with various methods/formats to choose from. Some of the information around Family Historian 6, has a little advice on a couple of methods to choose between.

Over the last few months I’ve been gradually working back through my family tree using FH6, adding one generation of my ancestry at a time, and their known descendants (this is why AFamilyHistoryBlog has been quiet for a while!). I’m aiming to cover 3 to 5 generations of descent from each ancestor. So far I’ve covered my 3x Gt-grandparents, with 1 gap out of 32 (which I don’t expect to be able to fill!). I’m now about 3/8ths through my 4x Gt-grandparents, thought here there are many more gaps with “unknown” people!. The dates of this generation start to precede the earliest available UK census records. Among their descendants I have many more gaps (which is expected). But by working through my tree systematically in this way, it has led me to new information and new discoveries in various places.

As of the start of April 2018, my new “project” in FH6 has more than half (~60%) of the number of individuals and families that my old database had. But this includes some new additions, and some omissions (due to a lack of original evidence) compared with the old database. So once I’ve gone through it all, I expect the new project to be about 25-50% larger than my old one.

My plan in the medium term is to publish reports onto AFamilyHistoryBlog about the various branches of my family tree, generated with the aid of the Family Historian 6 software. This may begin with those branches where I’ve already gotten back as far as I can, and those where to go any further back would just involve recycling information that has already been made freely available by other people in other places (for instance, the extensive FRY family tree)!

Family Historian 6 can be used very simply to record the basic details of a family tree, which anyone could handle. It becomes more complicated when you want to cite sources properly, and add media records, etc. But that is the nature of the subject and no fault of the program. Making back-ups of your data, to safeguard against your own future errors, or against computer failure, is very important, and in Family Historian 6 this is very easy to do.

For Christmas 2017, I was given the book “Getting the most from FAMILY HISTORIAN 6”

(£14.95 from Amazon), which is an extended user guide to the program, containing a series of tutorials to work through, using a sample project contained within the program. I found this really useful in learning about a lot of extra little features which I hadn’t previously realised were in the program. I wish I had had this book at the start. It would be well worth having the book, and to work through its tutorials during the free trial month when you first download the program. But I also learnt from the book that it is well-worth making maximum use of the “Help” menu features within the program, which contain a lot more information about the program.

There is also an active on-line users’ community forum; the “Family Historian User Group” (FHUG), where you can find a lot of help and advice if you need it. This is also where you can find out a lot more about “plugins”; additional code written by program users to add new features and capabilities to Family Historian, which can be freely downloaded by Family Historian users. I’ve only tried one “plugin” to date; “Ancestral Sources” (which is by far the most popular plugin according to the Family Historian website), which makes the entry and citation of information from census records, etc, much quicker and simpler. The only problem I had was with all the media, YouTube clips, etc, that I found explaining this plugin, which were all for a previous version! But they give you the general idea of how to use it. There are currently 81 plugins available on the Family Historian website, to be tried and explored; see FH6-PluginStore

So, I would highly recommend the Family Historian 6 software.

This week I heard about a very interesting new project called GB1900.org which needs volunteers to “help save GB place names from being lost for ever”, by helping to transcribe an “estimated three million place-names on early Ordnance Survey maps of Britain”.

So over the last few days I’ve been spending some time (which I would otherwise have not used very productively at my computer!) looking at the map and transcribing the names I find on it. I’ve blitzed my own local area (which now needs others to look at and “confirm” the transcriptions), along with several other places that I know well, and many others that I don’t.

Unfortunately this map is not old enough to show some of the places that I’ve been mentioning on AFamilyHistoryBlog; particularly farms connected with the WALKER family in West Lothian; like Hiddlefaulds.

They are trying to “save GB place names from being lost for ever”. But many names have vannished before the time of the maps that they have here to work on! I hope that perhaps these older maps will be added to the project at some point in the future.

The GB1900 website’s press release (which I’ll copy below) explains things best, along with the site’s Tutorial page. I’m finding this project fun to help with, and would really like to encourage others to get involved. 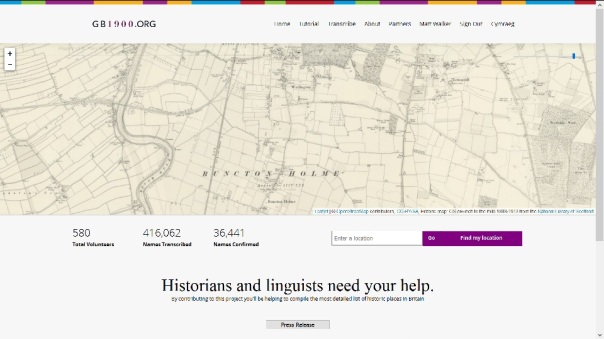 Help save GB place names from being lost for ever.

A new online project – GB1900 – is calling for volunteers in Great Britain to help make sure local place-names can live on rather than be lost for ever.

GB1900 aims to create a complete list of the estimated three million place-names on early Ordnance Survey maps of Britain. It will be a free, public resource, of particular use to local historians and genealogists.

On their new GB1900 web site, http://www.gb1900.org, volunteers will work on digital images of all the 2nd Edition Ordnance Survey County Series maps of the whole of Great Britain, at six inch to one mile scale. These maps show not just every town and village but every farm, hill and wood – and include names for most of them. The site’s software enables contributors to mark each name by clicking next to it, and then to type in the name itself. They can also add any personal memories they have of the place. To ensure correctness each name needs to be identically transcribed by two different volunteers.

The final list of place names will be not just the most detailed gazetteer ever created for Britain, it will be the world’s largest ever historical gazetteer. It will be released under a Creative Commons licence, making it usable by everyone without charge.

Professor Humphrey Southall, professor of Historical Geography at the University of Portsmouth, said: “We hope to tap into local knowledge about place names around the UK. The more people who can volunteer information through this project, the more we can make sure these names can live on rather than being lost forever.”

“Names of places are a vital key to unlocking the social and linguistic history of the land. They recall agricultural practices and local industries, changed landscapes and lost settlements. They preserve a rich heritage of Welsh- and Gaelic-language forms from across Wales and Scotland, chart the arrival of English, and illustrate interactions between the two.”

The project is based on cymru1900wales.org, which includes all the Welsh place names gathered by that project, and existing cymru1900 transcribers will be able to log in using their existing account information, but the new system needs many new volunteers wanting to work on England and Scotland.

Some other pieces about this project;

This site has been created to share and build up family history knowledge. As such you are welcome to copy and share any material from this website, subject to providing appropriate credit (unless a clear COPYRIGHT notice has been applied to a particular item) in accordance with a Creative Commons Licence.

This work is licensed under a Creative Commons Attribution-NonCommercial 4.0 International License.

A Family History Blog is a member of the